“By faith the walls of Jericho fell, after the people had marched around them for seven days.”

Celebration is an enjoyable activity cause by an important event, success or victory. Nobody celebrate without anything to celebrate. We celebrate because there are good things happen in our lives.

We fulfill our dreams, we finish our course, we accomplish our mission, we reached our goal, and we overcome all the challenges in life. Having said all of these, I am certain that victory happen first before celebration. First, we need victory in all our battles in life and celebration is just automatically follows.

But the question is how do we achieve victory over all the challenges in our life?

The above text tell us the summary of the whole story in old testament times how God gave his people a reason to celebrate. 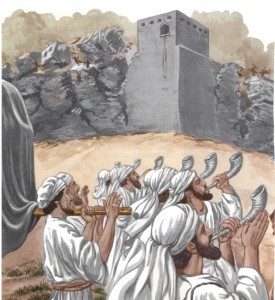 In the book of Joshua, Israel had a good reason to rejoice because after forty years of wandering in the desert, now the land that God promised to them is in their hand. They won the battle in one of the most important city in the Jordan valley. Capturing the strongest fortress in all the land of Canaan was not that easy with probably had fortified walls up to 25 feet high and 20 feet thick, with the soldiers standing guard on top of the walls could see for miles. Jericho was a symbol of military power and strength, the Canaanites considered it invincible.

But how Israel conquered this indestructible city? How Jericho fall into their hand?

What are the keys to break the high and thick walls of Jericho?

Today I would like to share with you the 3 important principles Joshua and Israel applied to conquer the city.  As we begin to understand these 3 principles, my prayer is that we can apply this principle to break the walls of our own personal Jericho.

1. LET THE LORD BE IN CHARGE. (JOSHUA 5:13-15) 13 Now when Joshua was near Jericho, he looked up and saw a man standing in front of him with a drawn sword in his hand. Joshua went up to him and asked, “Are you for us or for our enemies?”

14 “Neither,” he replied, “but as commander of the army of the Lord I have now come.” Then Joshua fell facedown to the ground in reverence, and asked him, “What message does my Lord have for his servant?”

After receiving the report of the two spies (Joshua 2:23-24), readying the troops, and crossing the Jordan, Joshua sought to ready himself. He went out to survey the landscape around Jericho, perhaps to make a battle plan. It was there that he was surprised when all of a sudden a man appeared to him with a sword in his hand. (V13). He asked the man if he were a friend or a foe. V13 continues with, “And Joshua went to Him and said to Him, “Are you for us or for our enemies?” V14, “ So He said, “No, but as Commander of the army of the LORD I have now come.” His response was not what Joshua expected he said, “Neither.”

We need to understand that when God enter to the situation he does not come to take sides…. he comes to take control. We are not ask if God is on our side, but determine that whether we are on God’s side. The more suitable question is, “Are we on the Lord’s side or against Him?” if we are on God’s side, let him control our life, let him be in charge of our life.

The second principle we need to learn is…

2. DO NOT QUESTION GOD’S IMPRACTICABLE METHODS. (JOSHUA 6:2-5) Then the Lord said to Joshua, “See, I have delivered Jericho into your hands, along with its king and its fighting men. 3 March around the city once with all the armed men. Do this for six days. 4 Have seven priests carry trumpets of rams’ horns in front of the ark. On the seventh day, march around the city seven times, with the priests blowing the trumpets. 5 When you hear them sound a long blast on the trumpets, have all the people give a loud shout; then the wall of the city will collapse and the people will go up, every man straight in.”

From military point of view these strategies was ridiculous and does not going to work. Marching around the city once each day for seven days, making a lot of noise and waiting for the walls to collapse certainly cannot be found in any of the military manuals and it doesn’t have any relation to the event.

In ancient warfare such cities were either taken by assault or surrounded and the people starved into submission. Its invaders might try to weaken the stone walls with fire or by tunneling. Each of these methods of assault took weeks or months, and it will cost lot of casualties.

Joshua was skillful fighter, a man who knows what it’s like in the battle (Ex.17)

He has been exploring the land for years even before Moses was still alive. Because of his experienced, perhaps he would have known strategies how to conquer the land but he choose to listen and follow God’s instruction because he knew when God take over the situation he can expect victory.

There are numerous of occasion in the bible when God take over the situation, giving instruction to people though it seems illogical or impractical and people listen and follow it works!

God promised Abraham and Sarah an offspring in their old age, they believed and its works! (Gen.15, 18)

When Jesus asked peter the fishermen to let down the nets again though he came from whole night fishing and haven’t caught anything he listen and follow and the result is overflowing joy. (Luke 5:4-11)

When Jesus spit on the ground to make a mud with his own saliva to put in the eyes of the blind to bring back his vision, its sound ridiculous but its work!

“When we follow God’s instruction it should not be base on logical reason but faith because the mind of God is way beyond our comprehension or our intellectual ability.

According to Isa 55:8 “For my thoughts are not your thoughts, neither are your ways my ways,” declares the Lord.”

3. DON’T QUIT FOLLOWING HIS INSTRUCTIONS EVEN IF IT IS DOESN’T MAKE SENSE. (JOSHUA 6:6-20)

According to “Nelson’s Illustrated Bible Dictionary,” Jericho lies about 13 kilometers (8 miles) northwest of the site where the Jordan River flows into the Dead Sea, some 8 kilometers (5 miles) west of the Jordan. Since it is approximately 244 meters (800 feet) below sea level, Jericho has a climate that is tropical and at times is very hot.

With the intense heat of the sun and with strategies seems illogical the most tempting feeling are irritation, impatient and begin to doubt whether they are doing right or not but we learned that these negative reaction didn’t happen to Israel, they were determined to comply on what God has instructed to them, they sacrifice their time and energy to complete the task even it seems nonsense and has no relation to the event.

The reason many people don’t succeed and overcome their own personal wall of Jericho or they don’t achieve victory over their personal battle and struggle was not because they didn’t do it but they just simply stopped their conquest of their personal Jericho. We may have been doing the right things, but we simply stop doing them.

According to Hebrew 10:36 “you need to persevere so that when you have done the will of God, you will receive what he has promised.”

CONCLUSION:
God has prepared a better future and abundant life that satisfy our soul. In Jeremiah 29:11 “For I know the plans I have for you,” declares the LORD, “plans to prosper you and not to harm you, plans to give you hope and a future.” There numerous promises of God to claim in his word but the question are, “do you believed in these promises? Are you willing to submit to God and leave your comfort Zone let him control of your life? Are willing to obey his command without hesitation even people think its nonsense? Are you willing to continue and endure hardship living under his will even it seems you’re just wasting your time. If you answer positively this entire question, then your faith in God will give you success on your own personal Jericho and you will have all the reason to celebrate because God has done marvelous things in you life.